Sleepy all the time? Sleep apnea could be the culprit 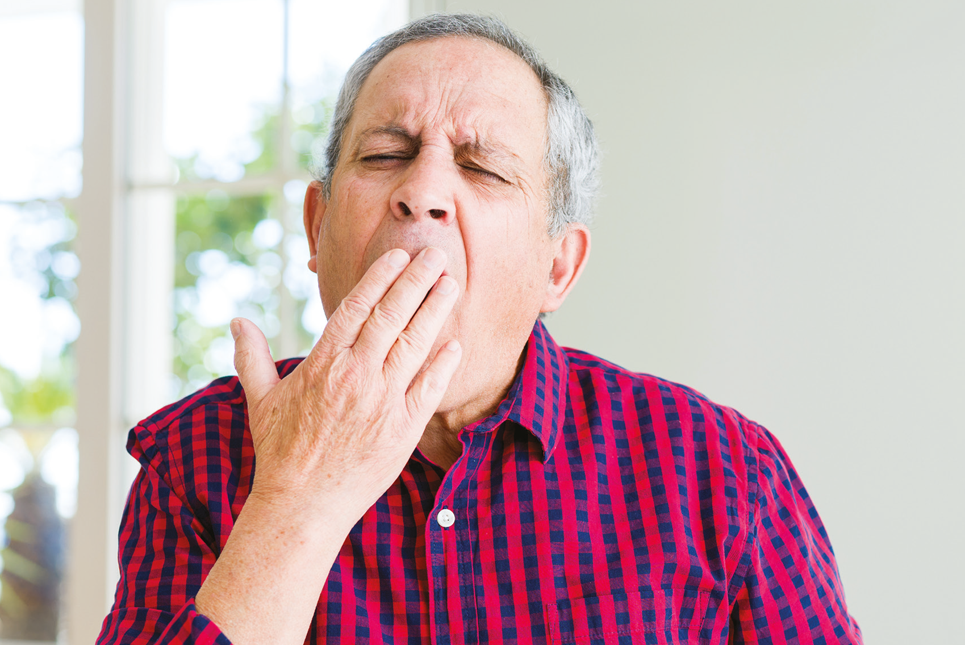 Richard is 61. A year after retiring, he’s surprised that his energy level still seems low, something he used to blame on a heavy work load. Far from feeling rested, he’s irritable, and worse still, has just been diagnosed with high blood pressure. Could sleep apnea be causing Richard’s problems?

“There are two peak periods for a sleep apnea diagnosis. When people are in the midst of their working lives—late 20s to 40s—and then, when they hit 60. Often, a physician will prescribe a test for sleep apnea when a patient calls them about another health problem that could be linked to apnea,” says Dr. Claude Poirier, a pulmonologist at the CHUM.

Obstructive sleep apnea is a chronic respiratory illness caused by the relaxing of throat muscles that results in the airway becoming partially or completely blocked. Occurring more often in men than women, this illness is as common as asthma, diabetes and high blood pressure, but 80% of those affected do not realize they have it. After we turn 50, the risk of developing it increases with age.

The problem is that we don’t necessarily notice frequent interruptions in breathing throughout the night because we’re asleep! Still, there are some symptoms that we should look out for: interruptions in breathing noted by the person we’re sharing our bed with, agitated sleep, gasping for breath, a feeling of suffocation or excessive sweating during sleep, daytime drowsiness, a drop in energy, concentration or alertness, irritability, depression, etc.

Why see a doctor?

If you’re worried, you can take an online test to assess your level of daytime sleepiness (Epworth). A score of between 10 to 20 means that you should get a medical opinion.

Sleep apnea saps more than your psychological well-being and quality of life. If left untreated, it also increases your susceptibility to heart problems, diabetes, high blood pressure, obesity and depression.

“Anxiety and depression are major issues in sleep apnea. Shortage of REM sleep, which is associated with this disease, can lead to depressive and anxiety disorders. If apnea is not treated, antidepressants will be given for these disorders, which will cause side effects such as weight gain. Obesity is one of the main risk factors for sleep apnea. In addition, this disease is characterized by a bigger appetite. It’s a vicious circle that exacerbates the situation as long as apnea remains untreated,” says Dr. Poirier.

What is the treatment?

Physicians diagnose sleep apnea based on test results. In 80% of the cases, the test is the cardiorespiratory sleep polygraph. But this is where it gets complicated. Dr. Poirier informs us that there is a wait time of at least a year to take this overnight test in the hospital, and that’s not counting the time it takes to get an appointment with a sleep medicine specialist. The entire process takes about two years. If you have $300–$600 to spend, it’s faster in the private sector.

The other problem is that the most effective treatment is the use of a continuous positive air pressure (CPAP) machine every night when you go to sleep. However, the device and the support required to ensure proper use can cost between $1,500 and $2,200, an amount that is not covered by the Régie de l’assurance maladie du Québec. In most of the Canadian provinces, on the other hand, people are entitled to financial support for the purchase of a CPAP machine. We had a similar program in Québec, but, in the early 2000s, it was cut.

According to Dr. Poirier, sleep apnea is treated as a second-class disease in our health system.

“A whole segment of the population—people with low incomes— is sleepy, even dangerously so, but they simply don’t have access to the tests and treatments,” he affirms.