History of the network

The past five decades have been marked by resounding victories for seniors’ rights, including hard-won achievements like the repeal of support obligations for grandparents, the abolishment of accessory costs, and more. Not to mention big FADOQ events like the Jeux FADOQ, which has been attracting upwards of 1,200 participants for over a quarter century! Over the years we’ve also seen the impact of key programs such as Viactive, Roses d’Or, and Ateliers FADOQ.ca as well as win-win agreements with major partners.

The best thing about our story is the combination of our commitment to our core values and the constant evolution that has helped the network meet the needs of its changing membership. That’s the source of the network’s power, which provides hope for a bright future for all people age 50 and over.

On March 3, 1962, when social worker Marie-Ange Bouchard first brought a group of retired men together in Saint-Jean-sur-Richelieu, she had no idea how big the Age d’Or movement would become.

As the history of Réseau FADOQ shows, that was only the beginning.

Réseau FADOQ gets its first logo, designed by P.E. Poitras in Quebec City. The cane is removed in 1998. In 2007, both the logo and the membership card get a facelift. The new stylized typographical approach focuses solely on the acronym FADOQ. 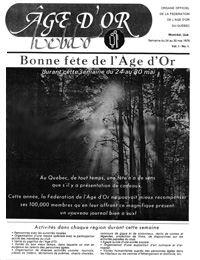 Réseau FADOQ starts managing Loto-Québec kiosks to generate funding for all levels of the organization. The Provincial Secretariat also submits multiple applications for government funding, leading the federal government to create the New Horizons program, which is still supporting regional networks and clubs to this day.

Réseau FADOQ is proud to partner with Kino-Québec to create and deliver the Viactive physical activity program for seniors. Viactive aquatique is created 10 years later.

The idea of creating a province-wide sports event for people age 50 and over comes to fruition in 1992, with the first Jeux FADOQ in Orford. The event focuses on the pleasure of being active and still now attracts some 1,000 participants from across the province.

Réseau FADOQ signs an agreement with AXA and SécuriGroup to offer its members insurance products and financial services tailored to their needs. The agreement provides relief for members who weren’t otherwise able to purchase life insurance.

After actively campaigning to end grandchild support obligations for grandparents, Réseau FADOQ succeeds in having the clauses removed from the Civil Code of Quebec. 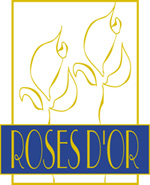 The ROSES D’OR pilot projects are in full swing and lead to province-wide implementation of this assessment program for private seniors’ residences.

The Qualité Logi-Être program is another Réseau FADOQ initiative aimed at improving quality of life for people living in private seniors’ residences.

Nearly 10,000 people fill the Molson Centre on November 2, 1999, for a big show presented as part of the International Year of Older Persons. It’s hosted by Clémence Desrochers and Lise Dion. 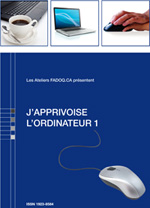 Réseau FADOQ helps introduce seniors across the province to new technologies with Ateliers FADOQ.ca, customized training sessions, and more, all offered at affordable prices. In 10 years, over 6,000 members are introduced to computers, the Internet, Microsoft Word, digital photography, Excel, and even multimedia!

In keeping with its focus on altruism and intergenerationality, Réseau FADOQ partners with Opération Enfant Soleil to support sick children in Quebec. It contributes nearly $200,000 over four years. Over the years, Réseau FADOQ has supported a number of causes through Fondation de l’Âge d’Or, Fonds FADOQ, and other means, including research on diseases related to aging, Maison des greffés du Québec, victims of the earthquake in Haiti, and more.

Protests, petitions, and a FADOQ GIS hotline are set up to get things moving!

Réseau FADOQ is appointed as Canada’s sole representative on the UN committee for the International Convention on the Rights of Seniors. It’s well-deserved international exposure for the network.

On October 11, Réseau FADOQ launches the Qualité Logi-être program, a voluntary assessment program that rates the human and physical environment in private seniors’ residences. This unique program is rolled out in conjunction with government certification to promote continuous improvement for the benefit of residents.

The event is held at the prestigious Bell Sports Complex in Brossard, the Montreal Canadiens’ official training complex.

The social contract is launched!
A press conference is held to announce a major campaign: a social contract for good quality of life for all seniors. Seven companies and organizations are the first to sign it, committing to implementing measures that benefit seniors across their organizations.

The social contract receives unanimous support
International Seniors Day 2013 is a historic moment: representatives of the four main political parties sign the social contract at a press conference at the National Assembly. It’s a rare example of unanimity on an important social issue.

Mouvement Bouton argenté gets off the ground 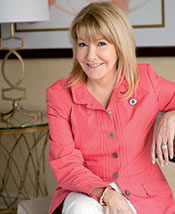 Réseau FADOQ spokesperson Louise DesChâtelets and a number of guests gather to launch the inaugural Mouvement Bouton argenté. The awareness campaign is effective: thousands of people wear the symbol of good quality of life for seniors and sign the social contract.

MéningesJeux are here!
Bridge, cribbage, 500, and military whist sharks converge on Drummondville for the first MéningesJeux event. The event is a resounding success and will be back in 2015.

Well-being is the buzzword at the 2015 FADOQ convention in Gatineau, where 180 delegates participate in small group discussions, well-being priority sharing, talks on well-being, and workshops on enjoying life’s pleasures. The network’s 45th anniversary is celebrated at the banquet.

No more accessory costs
Réseau FADOQ and a number of other organizations denounce the government’s decision to legalize accessory costs in Quebec’s healthcare system, a source of overbilling that hits seniors especially hard. The issue becomes a priority for the network, which resolves to do everything in its power to force the government to back down.

Réseau FADOQ launches the maind’oeuvre50+.com program, a web portal with a search engine that matches workers age 50 and over with employers interested in hiring them. In just a few months over 3,000 candidates register.

Happy 25the birthday, Virage!
The first issue of Réseau FADOQ’s official magazine is published in April 1992. The milestone is celebrated during the FADOQ convention.

Alma welcomes 1,500 participants for the 26th provincial Jeux FADOQ. Over 15,000 seniors had participated in the regional Jeux FADOQ. Pickleball is the newest event.

The bullying component of the Senior-Aware program is launched with two videos that are shown at free sessions across Quebec.

Walk in a senior’s shoes at the Dans la peau d’un aîné workshops
These workshops on proper care for seniors are launched and attract 5,000 attendees in the first year.

There’s a new way to age actively with the first of FADOQ’s eight Les Grandes Marches hiking events in 2018.

Good news from the UN
Réseau FADOQ succeeds in getting Canada on board with the draft UN Convention on the Rights of Older Persons.

FADOQ in the spotlight in Toronto
Réseau FADOQ is a key partner of the first International Federation on Ageing Global Conference to be held in Canada.

FADOQ’s charity fund
This initiative aims to ensure long-term sustainability for the network’s programs and activities.

New! Fadoq 360 information sheets
Inspired by questions raised in calls and emails to Réseau FADOQ, each sheet covers a topic and provides answers to the most frequently asked questions based on reliable information sources..

You can now browse through Virage on line
Introducing a new privilege for FADOQ members: a complete digital edition of Virage at viragemagazine.com 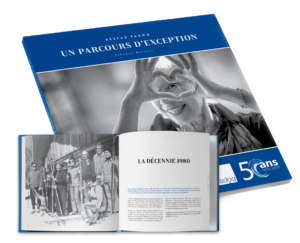 Publication of a book on Réseau FADOQ – Un parcours d’exception
This book tells the fascinating story of our organization, from the moment its founder, Marie-Ange Bouchard, had the idea of creating the first golden age club to address seniors’ loneliness and boredom. This souvenir book bears witness to the spectacular evolution of the FADOQ network, highlights its 10 greatest achievements over the years, and includes the history of the 16 FADOQ regional groups.

Renewal of the partnership with Intact Insurance
The agreement between Réseau FADOQ and a long-standing major partner will be effective until 2025. A partnership of over 30 years.