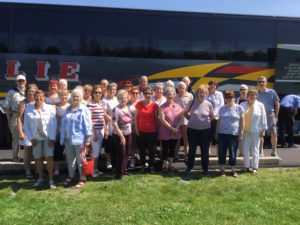 Our club was formed in 1972 by a small group of parishioners from St-Joachim de Pointe-Claire. According to the FADOQ, the club had already been incorporated in 1980 but lost its incorporation in 1990 for failing to produce the compulsory annual declaration as well as the financial report. Weekly activities took place and still take place at the Noël-Legault community centre, owned by the City of Pointe-Claire, which graciously offers us a room on Monday and Wednesday afternoons for our activities with seniors.

A second wind, a new start:

In 2008, after the surprise resignation of the then president, the late Mrs. Marie-Berthe Seguin became president and asked me to join the club in order to become a member of the Board of directors. I accepted. At the annual general and special meeting in May 2008, I therefore became a member of the board and was appointed secretary. To be affiliated with the FADOQ, the club had to be incorporated. The process was undertaken and we received our letters patent on August 4, 2008. We established our general regulations. We had around 80 members. New ideas were brought to the BOD and rigour was established in our operations. This upset some long-standing members. These members resigned. So, we recruited people willing to fill the vacancies from among our acquaintances.

Finally! In May 2019, the BOD decided that all our members had to become members of the FADOQ and pay the $25.00. membership fee of which $10.00 would be given back to the club. This decision was clearly explained to the members at the general meeting and accepted by the majority.

Since 2019, there are 11 people on the Board of Directors. There is work for everyone. “Insight often springs from a clash of ideas,” they say. The BOD holds 7 meetings a year.

We are aging well:

In April 2012, we celebrated 40 years of existence. Hoping that COVID-19 has become nothing but a bad memory in 2022, we will celebrate our fiftieth anniversary in a fitting way.

Here is an overview of our activities:

Line dancing on Mondays and card games or scrabble on Wednesdays.

We try to offer a monthly activity such as a day trip including a visit and a meal, bingo, brunch, etc…

During the summer, we offer a play, a trip for a few days or for a single day, such as a cruise.

Since 2014-2015 we have been printing a leaflet of the year’s activities that we give to each of our members. It includes club policies and information on the composition of the BOD. At the start of the pandemic, we had 223 members originating from Pointe-Claire, but also from several surrounding cities.